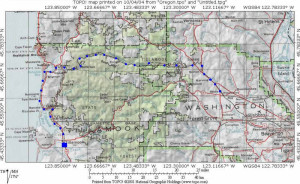 The Blue dotted line is the course of the Port Of Tillamook Bay Railroad.

The winter storm event of December 1st through 17th, 2007 resulted in severe damages to portions of the Port of Tillamook Bay Railroad (POTBR) alignment. The 87-mile long rail line originates in the town of Banks, OR (MP 769.03) and trends west across the mountains of the Coastal Ranges eventually terminating in Tillamook, OR (MP 856.08). Click map to the left for larger view.

Partial damage assessments were originally performed along the alignment in February and March of 2008. However, due the extremely rugged terrain and excessive snow cover, additional assessments were delayed until May and June, when the snow melted, allowing access to the interior areas of the alignment by foot within the Coast Ranges.

The railroad grade is currently severely damaged and not operational. The entire railroad alignment was surveyed by FEMA Geotechnical Specialist Jason Holcomb from January through 2008, along with Cecil Walker (CEF / Railroad Specialist).

The most severely damaged area is located within the central portion of the alignment from Cochran (MP 800) through the junction of the Salmonberry and Nehalem rivers (MP 815.76). The damage areas located outside of the major damage area consist primarily of debris removal in addition to relatively small isolated areas of embankment erosion and ballast contamination.

Within the major damage area, a majority of the damaged sites consist of erosion of the embankment fills supporting the rail bed. Most of the eroded embankments are located on the outer bends of the river where most of the erosive forces from the flood flows were concentrated.

In addition to the embankment and track damages, several bridges experienced minor to major damages, and two bridges were damaged beyond repair requiring replacement. Three tunnels also experienced minor damages with one completely covered by a landslide.

Cecil Walker started work with the team in August of 2008, and completed the draft December 2008. Although the entire eighty-seven (87) mile rail line is damaged, a twenty mile segment of the line was nearly completely devastated. Much of the line is accessible by high rail, but the major damage area is only accessible by hiking in.

The Teams hikes ranged in duration from four miles to eighteen miles a day, often in rain, snow, or hail, and always with a thirty + pound pack to carry equipment, ropes for climbing, food and water.

While this part of the country is home to very beautiful landscapes and numerous wildlife that has had little human contact, it is very rugged terrain. Some of the washouts we crossed on foot were over 200 feet deep.

There are approximately 87 miles of rail line throughout the Tillamook mountain forest, and we covered every single foot in four months. This includes 77 bridges and 10 tunnels.

The Tillamook Railroad and rail bridges were built around 1906 – 1911. It was amazing to find the old camp sites and logging sites they used to build this railroad. The railroad was built by hand, so when you consider that some of the bridges rise over four hundred feet off the canyon floor, the project becomes fascinating from an engineering as well as a historical perspective of what men had done with limited resources. 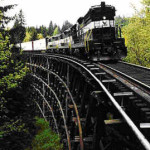 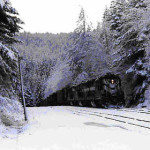 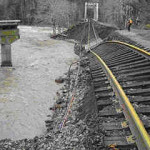 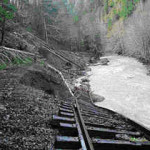 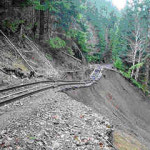 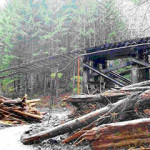 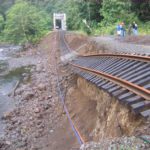 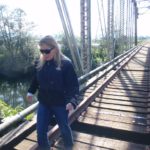 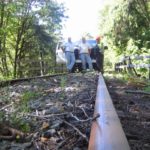 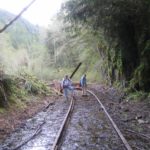